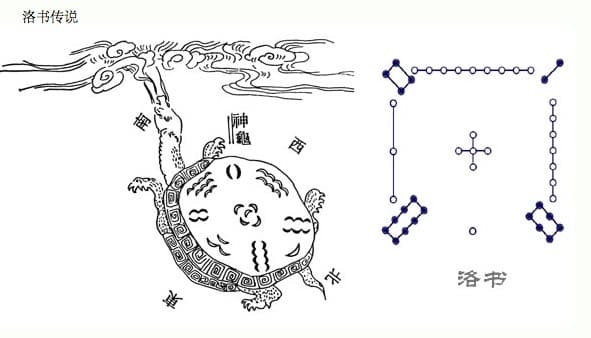 The origin of the Nine Palaces (Jiu Gong)

Yu the Great, founder of the first empire, lived in the Xia dynasty around 2205 B.C. Yu was appointed to make the flooding from the Yellow river stop. “During his reign, King Yu controlled floods by regulating the Yangtze River and the Yellow River and by connecting all the watercourses. He dredged 300 large rivers, cleaned up 3,000 canals and channels and millions of smaller streams.”(1) “One day Yu stood on the banks of the Luo River, a tributary of the Huang He or Yellow River, a tortoise emerged from the water bearing on the under plate of its shell an array of symbols representing numbers.”(2) This diagram is known as the Luo Shu Tu, Luo Shu magic square, Nine Palaces diagram or Nine Halls diagram. “It is considered to be the graphic form of the ‘Great Plan’ described in the Classic of History which includes perhaps the earliest reference in Chinese literature to the Five Elements and their associated numbers. The tortoise…, whose back is round like Heaven and whose bottom is square and flat like Earth–it’s a representation of the microcosm.”(3)

The magic square is a mathematical model of the universe. It can be used in astrology, feng shui and traditional Chinese medicine.
The diagram stands for the harmony between humanity and nature. The diagram expresses a number of systems of thoughts. It contains time, space, directions, the Five Elements, the Eight Triagrams, the Ying Qi cycle, Heaven-Human-Earth, San Jiao and the human body.
The square is composed of the numbers 1 to 9. The sum of each line, column and diagonal is 15. The odd numbers 1, 3,5,7,9 are defined as Yang numbers, while even numbers 2,4,6,8 are Yin numbers.

Nine palaces and their correspondences

The Nine Palaces Acupuncture and its clinical application

The Nine Palaces Acupuncture Method is mentioned in the ‘Zhen Jiu Da Cheng’ (The Great Compendium of Acupuncture and Moxibustion).

Heaven – Human – Earth balance
To balance these three we treat three distinct parts of the body.
For Heaven we can use points on the upper Jiao, like Shen Ting (Du24), Yin Tang (Extra M-HN-3) or Tian Tu (Ren22).
For Human we use the Nine Palaces on the umbilicus.
For Earth we use the Eight Lines and Three Jiao (Burners) on the forearms and lower legs.

Eight Lines and Three Jiaos on the limbs

A special method of needling is the slow insertion technique. For the patient this is painless and has great effect. For the doctor it is a particularly difficult task. Without turning the needle, the needle is continuously held perpendicular to the skin without pressure. With prolonged retention Qi accumulates on the tip of the needle, until the needle penetrates the skin. The De-Qi can be so strong that no further needle stimulation is needed.

How to use in clinic

Yu XX, Female, 43 years old, complaints: vague lower abdominal pain for 6 days after menstruation; these symptoms have appeared three times. Can’t fall asleep at night, feels depressed. Urination and defecation are normal.
Tongue color: red, the two sides have some red prickles.
Tongue coating: white.
Pulse: left side wiry. Right side weak in the guan position. On both sides the chi positions are deep and weak.
The umbilicus test:  put middle finger on the umbilicus and index finger on the No.3 area, ring finger on the No.7 area according to the Nine Palaces and “heaven- human-earth” levels. Found the No.3 area is tighter than No.7 area, and in the No.1 area, the Earth level is empty.  Also the local skin colour of the right lower abdomen is dim.

This patient is a lady, suffering from pain after each menstrual cycle. Depression, insomnia and the pulse show she has Liver Qi stagnation, but she also has deficiency symptoms. We chose the No.3 line, and focused on the Middle Jiao (zhongjiao) area; this is to regulate the Liver Qi. Treating the No.7 is for balance, balancing the ‘Metal’ and ‘Wood’. We also found a color change in the No.7 Line, distal to the point San Yin Jiao (SP6): a white spot. We needled this point with a reinforcement manipulation. On the umbilicus we chose No.3 and No.1 for tonifying the Kidney Qi, to encourage the ‘Water’ to enhancing the ‘Wood’. These theories come from the Nine Palaces, which also emphasizes the concepts of correspondences and balance. After four treatments the pain lasted only one day after the menstruation. Her depression and insomnia also improved.

Dr. Feng Ning Han, one of two sons of Dr. Feng Da Qi, was born in 1948 in Hangzhou. He started to learn traditional Chinese medicine from his father at the age of fourteen.
At the age of 19 he attended the Hangzhou University.
He headed the acupuncture department of the Railway hospital in Hangzhou for over 20 years until he retired in 2008.
He still works part-time in the Tong Jun Tang TCM clinic in Hangzhou. He also teaches his method to Chinese and foreign students in China and abroad.

It would not have been possible to write this paper without the help and support of the kind people around us, to only some of whom it is possible to give particular mention here.
We would like to express our deepest gratitude to our teacher, Dr. Feng Ning Han, for teaching us his acupuncture system and his excellent guidance, motivation, caring and patience.
We also would like to thank Anthony O`Connor for his input and his help with the translation.